- And many more... Check the Traclist PDF to see the full list of sounds included in the pack

This pack can be complemented with:

More about the pack:

- Apart from shot sounds, there are reloading & handling sounds

- There are singe-shot sounds but also loops (Rotary cannon)

- This SFX are suitable for Sci-Fi games but also for warfare, modern warfare ones.

- All you'll ever need regarding Sci-Fi Gun Sounds

All files are in:

[Use them again & again]

Use the sound effects over and over, in any of your projects or productions, forever without any additional fees or royalties. Use the SFX in your game, in your trailer, in a Kickstarter campaign, wherever you need to, as much as you want to.

For custom music, sound design, sound engineering or any other game audio services, please send a mail to: audioalchemiststore@gmail.com

In order to download this asset pack you must purchase it at or above the minimum price of $14.99 USD. You will get access to the following files: 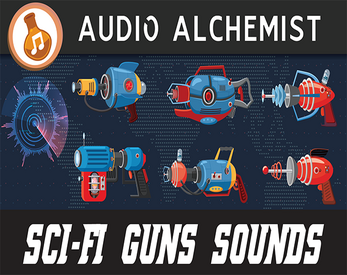